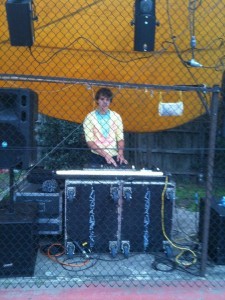 Today I invested (as an interest-free loan) in a large pair of speakers for my 16-year-old son – who’s starting up his own DJ-ing business. [I think the next thing I’ll need to invest in is a set of ear plugs]. He’s been practicing for months on a music mixer and other technologies and officially ‘DJ’d’ a birthday party last weekend, which was a huge success. [The picture on the left is of him in action.]

What’s really impressive is that he’s created a website for himself, has started up his own fan club, is reaching out to his connections on Facebook and his friends at school to promote his business. And you know what? – It’s working. He’s started to generate a lot of interest for his services and has at least four birthday parties in the pipeline. He’s steadily raising his profile and starting to create a buzz about his talents in his area of interest and passion, which is music and technology.

I’m really proud of him (as any mother would be) considering he’s doing all of the things that I constantly encourage my clients (both job seekers and entrepreneurs) to do, when trying to raise their profiles out in the community about their services and expertise.

So, what are you doing to continue raising your profile?  Here’s a few things you should be doing:

Anyway, I’m off to join my son’s fan page!

Have a fabulous day!